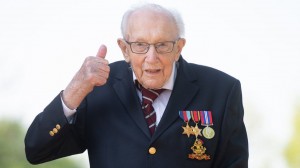 In many ways, Captain Tom showed us all that charity begins at home, and by doing that, he became a hero to many of us.

Captain Sir Tom, who was given the honorary title of colonel on his 100th birthday, had initially set out to raise £1,000 for NHS charities by walking laps of the 82ft (25m) loop in his garden in Marston Moretaine, Bedfordshire. But he eventually raised £32,794,701 from more than one and a half million supporters.

May he Rest in Peace – thank you Colonel Sir Tom!