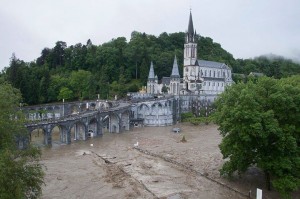 Our hearts go out to everyone in Lourdes experiencing the horrible floods. The Living by Giving Trust recently sent money to Lourdes to help after the October 2012 floods, but reports are now suggesting that the June floods are much worse. Our friends at the CA Hospitalite have posted the following news item with updates added. 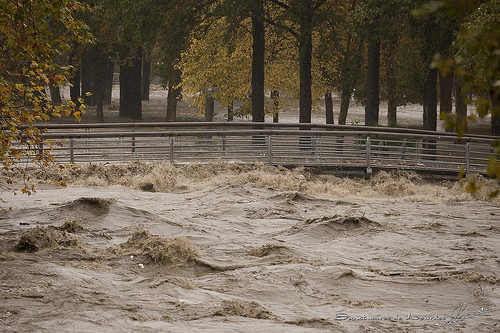 From Sadie Vile, Trustee: “On 20 October 2012, following an extended period of heavy rain in the surrounding area, the River Gave in Lourdes, France overflowed, affecting some hotels and particularly the Domain, the area where the main activities of Lourdes take place.  In the Grotto, the water was about one metre deep, almost level with the top of the altar.  The good news was that no one was injured, thanks largely to good local organisation, and it being the end of the main pilgrimage season, so visitor numbers were fairly low.

After a rapid clean up throughout the Sanctuaries, using earth-movers and high pressure hoses to clear the debris and mud deposited by the water, it could be seen that the tarmac surfaces around the Grotto, and beyond towards the Baths were very badly damaged. The same was true on the Prairie opposite the Grotto, and the bridges within the Domain were also seriously affected.

The estimated cost of all repairs is currently 2.5 million Euros, and the Sanctuary is responsible for about 1.2 million Euros of this.

It was imperative that repairs were started as soon as possible – the surface damage was so bad that it has been very difficult to move people around in wheelchairs, especially towards the Baths, which normally stay open throughout the year.

An appeal was immediately launched, and by the end of November over 500,000 euros had been received by the Sanctuaries.  Initial work focussed on replacing the tarmac from the Esplanade to the Baths, and repairing the central bridge that leads to the Accueil Notre Dame.  The challenge will be to raise the remaining money needed, now that the floods are ‘old news’.

Having met through their volunteer work in Lourdes, the Trustees of the Living by Giving Trust decided to make a small contribution towards the ‘Flood Solidarity’ Appeal, and have donated £100 from our funds, as well as making personal donations.  We are lucky to be able to transfer the funds through a UK-based Lourdes charity who have been amalgamating UK donations in order to minimise the costs of converting the donation to euros.

If anyone reading this wants to contribute, we can advise how to contact the British Hospitalité Trust, who can transfer a UK-based donation and even arrange for the Gift Aid to be claimed if appropriate.”